In 2016, our own Tore Lindeman and her husband, who is not a U.S. citizen went to cast their votes at their local precinct. Tore had not yet switched her address over to her new residence and instead produced her passport. She was refused and told she would have to show her state-issued ID. A woman seated at the desk looked at her printed list and said, “Barry Lindeman CAN vote, but NOT you.” Tore responded to the woman by explaining that she was Lindeman’s wife and referred the woman again to her passport, to which the woman told Tore that was NOT considered valid identification. 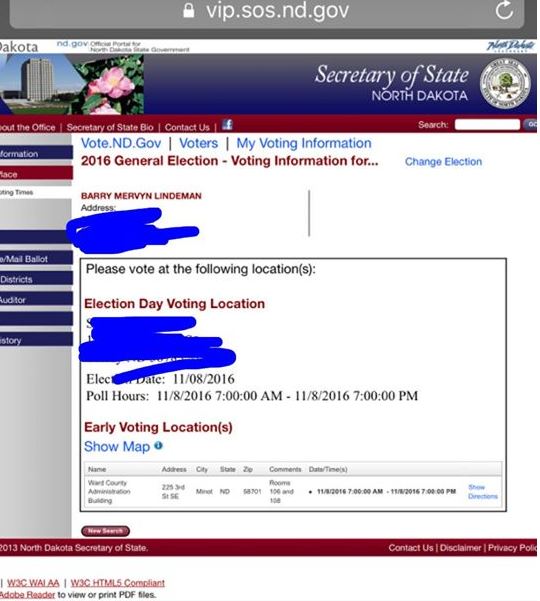 Tore demanded the woman immediately take her husband off the list since he is not a U.S. citizen. The woman said that was something he would have to do on his own and that if he is on the printed list, he could vote. Tore told the woman she didn’t know how to do her job, and the interchange became increasingly more heated. The police (located next door) were called to straighten things out.

When they arrived, the police confirmed to the woman behind the desk that a U.S. passport is indeed a valid form of ID, and that since her husband is not a U.S. citizen, he is legally not allowed to cast a vote at all, yet he was still on their list.

When Tore got home, she started doing her homework and checked on all the places where she and her husband had drivers licences. She noticed that both she and her husband were registered to vote in the state of Kentucky, and made a phone call to Attorney General Beshear who is the newly elected governor, and Secretary of State Alison Lundergan Grimes demanding they remove their names from the voters' list. She also formally put in a complaint on the fact that her husband was listed as being registered to vote, even though he was not a U.S. citizen. 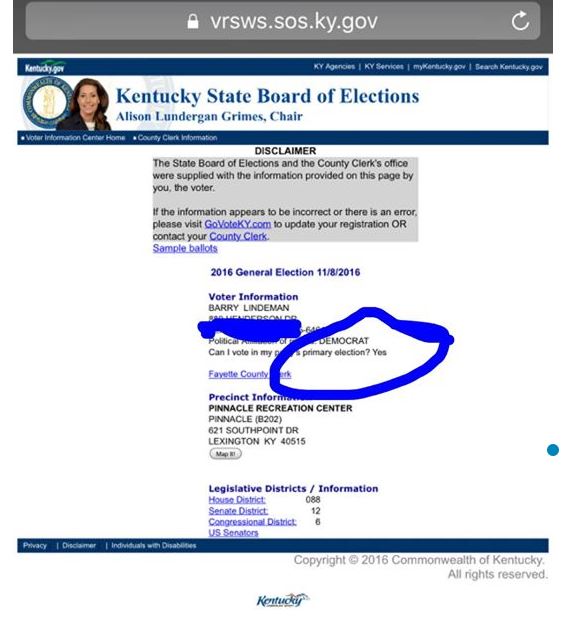 In July 2016, the AG office finally got back to Tore. Her main concern was the possibility that her husband could be auto-deported when it came time for him to renew his alien registration if someone were to vote using his name.

They ensured Tore that both she and her husband’s names would be removed and for Tore to send a letter to their office with the couple’s signatures having been notarized. Tore faxed the notarized letter to their office and then mailed it in.
During the 2018 midterm elections, Tore again checked to ensure that she and Barry were no longer on the voting list in Kentucky, and found their names had both been removed.

After hearing of the voter fraud in Kentucky a few days ago, Tore decided to double-check the list online, and BOOM…both of their names have mysteriously found their way back onto the official list.


How did this happen?

AG Beshear litigated against the state to reinstate 175,000 people who had been removed from the voter rolls, and we know of at least two people who were added back on.
This morning, Tore called the Kentucky electoral board and spoke to a woman who confirmed a suit required 175,000 once removed names to be added back to the voter list. (Hear the full audio of the phone call below)

The unnamed woman from the Kentucky electoral board said, “Recently we were in litigation. We had through the course of this last, what’s called list maintenance, deemed 175,000 voters as inactive. Then through litigation, from different individual agencies, partners, individuals, that suit required us to add those 175,000 back in. You said the only way you knew that in 2018 is that you checked and you weren’t on, the only way I can envision that that happened is through that process. I cannot see all of the activity records. I’m the low man here, I’m not one of the chiefs.”

Tore responded, “My concern in 2016 was, because everyone was talking about all this election fraud, what if someone votes on behalf of my husband, then he is going to get automatically deported. That’s automatic deportation.”

“That was my first red flag when you called was how first and foremost was he able to register? There are cards and the cards have permanent retention. If you’d like me to I’ll be glad to call Jefferson though they are extremely busy and this would not be something that would take front burner, I assure you of that,” the unnamed woman for the electoral board said.

“Because I’m pretty sure I’ve never clicked Democrat because I never ever state my political party being myself that I worked in the government. Right? That’s one thing you don’t want to show any bias on, we all know that. So, the fact that it has me listed as a Democrat is insane, but it’s also insane that they have him as a Democrat and that he is registered to vote,” Tore continued.

“I took my husband there myself and he had to show his alien residency card. He got his social security card from the state of Kentucky because that’s where he flew into when he got his alien residency. So that’s what blows my mind. Not only did they register him, but they said that he had the right to vote. They knew he wasn’t an American. That’s why it blows my mind.”

“Right, right,” the woman from the electoral office replied. “That’s why I stated to you prior that all I can try to do is help you in this endeavour. I worked here in 2016, I worked in the same position and I would have kind of remember this, I don’t know. That was a presidential election year, so there was a lot going on.”

“June is when I called and July is when the office got back to me and told me that I needed to fax them this and then mail of the notarized one with our signatures. What sucks is, I don’t have the email correspondence because I purged it in 2018,” Tore said.

The woman at the electoral board explained that each time the information was changed on their registration, including address changes that the registration itself is updated in the system.

“I can start an investigation for you. I would emphasize the process for retention on any type of correspondence from 2018 has passed, well, we’re right at that 22 month period. I have spoken to my executive director in reference to this situation and that’s the best avenue I can find for you right now to ensure that you are not on these voter rolls. Beyond that, you speaking to the AG’s office in 2016 is beyond my control,” the woman stated.
Then the woman at the electoral office really drives the point home by explaining this isn’t anything new, “This is not the only time I’ve seen this happen. Individuals that hold a green card are able to get driver’s licenses, unfortunately, are erroneously registered here and then when they go through the process of naturalization, they find that out and then they have to go through a lengthy process to ensure that that is denoted so that they can re-register.”

Hear the audio of the phone call here:

Want to see more journalism like this that the mainstream media isn’t reporting on? Support independent journalism at LauraLoomer.us by CLICKING HERE to subscribe and donate today - thank you!

Haley Kennington is an investigative journalist, freelance writer and reporter, as well as a contributor for dozens of conservative news sites, blogs, and independent media outlets.