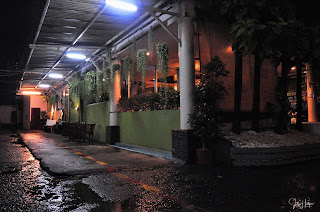 02:50 in the foyer of the New Road Guest House, Bangkok. Raining hard outside, it's the end of the monsoon season and the weather grips the humid night. We've a very early start to catch our plane to Mandalay, Myanmar where after a day layover in the city we catch a sleeper train, heading north where the real adventure and search for the Pink-headed Duck starts. 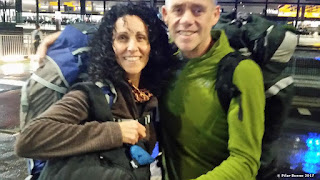 Don't you just love the skills of strangers with your mobile phone camera?

We had a hectic day yesterday. Our long-haul journey was tedious, uncomfortable and none ending but is what it is. We flew from Heathrow – Oman – Bangkok. The first leg of the flight was a disaster for Pilar and I. We had horrible, cramped seating. My TV didn’t work (only 9hrs looking at a movie of choice……..with no sound!) To top it all, the meal Pilar had booked online with the airline did not materialise. Our #Vegan delights had not made it onto the plane. 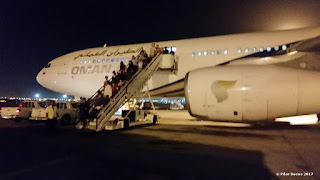 Apologises on behalf of the caterers were forwarded and we were presented with a large ball of sugar and syrup with some form of eggy goo in the centre as a consolation, err, no thank you. 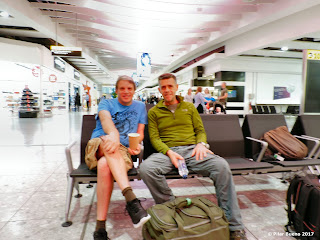 Exhausted after our 18hr flight we land at Bangkok for stormy skies. After collecting our bags and catching the Sky Train and a taxi we arrived tired but excited at our guesthouse. We were several hours too early to check in, so no shower or sleep was waiting for us until at the earliest 14:00. 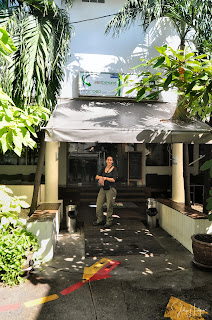 Pilar Bueno outside our guest house upon arrival

Fighting off the fatigue and humidity we ventured into the suburbs of old town #Bangkok, searching for sustenance but most of all coffee. Errol and Richard found a McDonalds, I know, I know, they needed their Maccy fix and chowed down on something gross, haha. The coffee and O.J. tasted like heaven. 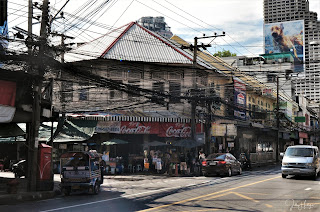 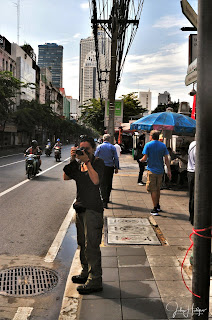 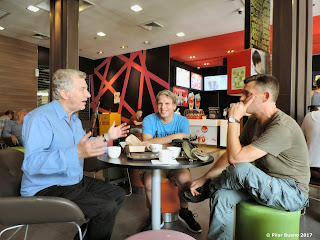 At 3pm we had an appointment with a journalist from the associated press who wanted to film interviews with us all. Thankfully that gave a little time to check-in our very reasonable and cleans rooms, freshen up and go over a few points of interest with the journalist before filming started.

The light was poor and the rains were threatening again. But nevertheless the hour filming went without hitch and all parties seemed happy with the results. When edited and live online I'll post a link. It should be across the news networks with a few hours, keep your eyes peeled on the news stations and let me know if you spot us.

Not really related but while talking with the journalist he told us he was covering the official funeral of the late King of Thailand, King Bhumibol Adulyadej, who passed away October 16th, 2016.

I had no idea that he hadn't been cremated yet. A full year of official mourning but now the country and especially the city of Bangkok is gearing up to see him off with what I expect will be a very emotional event. We'll be long gone and probably knee deep in mud and muck inventing new phrases of hatred and expletives aimed at the swarms of bugs that await us. I know where I’d prefer to be, and I certainly won’t be wearing black, more like ‘Wellies and Combat Jungle Chic, it more my kind of madness, better get my hair done.

After the interview, we freshened up again and headed out. We trawled the streets for a suitable eating place, somewhere not ‘too street’ as Richard and Errol had more refined palettes than Pilar and I, who are used to eating from the street stalls. 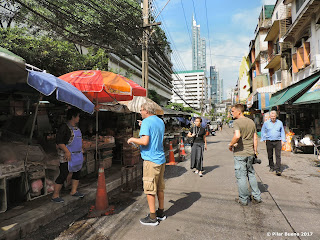 We eventually found a restaurant called, imaginatively ‘The Thailand Curry House’. Advertised on a board outside was the deal clincher, a veggie set menu. Pilar and I had Vegetarian Spring Rolls, Red Thai Curry and steamed rice. I even broke my sobriety of 2017 and partook in a cold Singha Beer, which I confess was bliss. The food was superb and the stories, adventures and sparkling repartee from Errol Fuller (he does a superb impression of his friend Sir David Attenborough) kept us entertained. 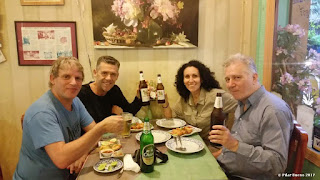 Finally, at the 8pm we gave into fatigue, beer and food and on autopilot head back for the bliss of bed and long overdue sleep. Poor Richard was nodding off in the restaurant.