This a account from our travels around the islands of New Zealand in 2008. On this very special day we had a extraordinary encounter with the critically endangered Fiordland Crested Penguin. 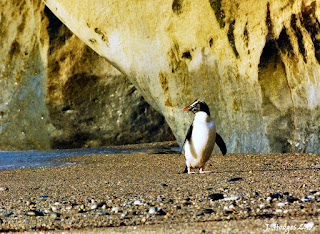 “I wish this damn rain would stop, it's just typical” groaned Pilar, my Spanish girlfriend.
I understood her sentiment exactly.

We'd driven our camper for six hours up the west coast of the South Island of New Zealand, to arrive a couple of hours before sunset at Monroe Beach in the hope of seeing a very rare and charismatic Fiordland Crested Penguin (Eudyptes pachyrhynchus).

“Hang in there” I said, “I'm sure this rain shower will pass” as I looked out of the van window secretly doubting my own optimism.

We sat for an hour silently listening to the rain rap out its own hypnotising rhythm on the roof of the van. Then as suddenly as the downpour had started it ceased and a welcoming sun appeared out of the clouds. Instantly the sand flies started to swarm around the van. We love everything about the South Island of New Zealand except these little, black, blood thirsty muggers with wings, enough said.

Undaunted we set off on the half hour hike through the coastal woodland. Slightly sweaty and out of breath we emerged from the dark, dense forest onto Monroe Beach, bathed in warm light from the slowly setting sun. As we took our first steps onto the soft sand we saw our first penguin coming out of the surf two hundred metres away down the east end of the beach. Approximately 40 cm in height with distinctive white sulphur-yellow feathery eyebrow tufts, deep crimson eyes and an orange bill that reminded me of the extinct Great Auk.

Our hearts were in our mouths, what a privilege to be here and our timing couldn't be more perfect; photographing wildlife doesn't usually pan out this easy.

In typical penguin style the bird waddled up the beach stopping briefly to shake the water from his aquatic tuxedo. She had spent a hard day feeding at sea, whilst the male guarded the next generation in the coastal forest site nest. 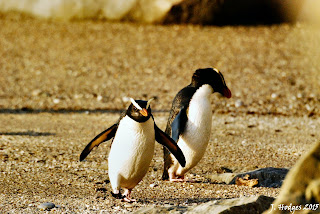 As the sun sinks in the west the females head back to the beach to relieve their hungry partners. The males are then allowed to feed during the night returning just before sunrise with a full belly of fish and squid to let the females venture back to the stormy Tasman Sea.

You get an hour of action at sunrise and dusk, that’s it. Conditions couldn't have been better. The sun was setting behind us so that the penguins were blinded to our cautious approach.

In a little over an hour we saw a dozen of these shy and endangered birds, belly surfing onto the shore by riding violent breaking waves. None the worse for wear they marched up the beach and then after a cautious look around preen and oil their wet suit of feathers. 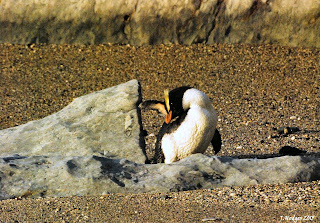 I managed to get within thirty metres without spooking them, careful to take cover behind available rocks. The birds were completely unaware of us and the late evening light was turning the wet rock face into a shimmering gold leafed back drop. The adrenalin kicked in, my camera a part of me capturing once in a lifetime images. Pilar, whilst filming, cursed under her breath a Spanish expletive as she disappeared into a cloud of sand flies.

The sun now sinking into the ocean, scattered silver fingers of light across the crest of the waves and onto the wet sand; it was time to go.

As we were leaving we saw two birds riding the breakers waiting to come ashore. No sooner had we broken cover, the penguins saw us and were hesitant about coming onto the beach.
Two photographers who had also been hidden in the rocks appeared and scrambled down the beach to get closer shots. This reckless behaviour really raised my hackles, it’s crossing the line. The pictures are not important if you have to stress the animal subjects to obtain them. I waved them back and reminded them of the importance of non interference especially if you want to photograph natural behaviour. They agreed with me sheepishly; I suggested politely we leave the beach to let the penguins do their penguin stuff.

Happy with another new wildlife experience we headed off to the nearest camp-site at Lake Paringa, yet another breathtaking mountain lake with a mirror smooth surface.

Arriving just as the darkness fell, Pilar made hot chocolate while I downloaded my precious photos. 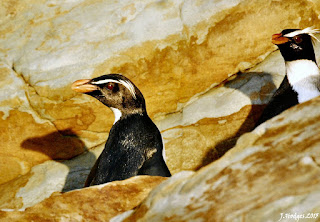 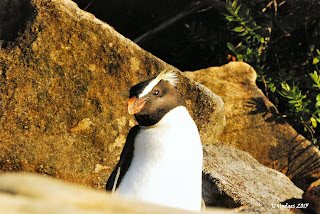 “I wonder what we'll encounter tomorrow” pondered Pilar.
“We might see a Moa as we're in the right neck of the woods” my poor joke fell on deaf ears.
“Up at dawn and porridge, I suppose” sighed Pilar, I knew she didn't really mind, we we're both living our dream.

That night in our van we dreamt of our little penguin friends.

The Natural World Through My Eyes & DOG TALES

To anyone who doesn't know me my greatest passions in life are Health & Nutrition and Natural History. Ever since I was a toddler the Natural World has held me spellbound. If it swims, crawls, flies or photosynthesises I'm in wonder of it and have to know everything I can about it.

My passion has shaped my life our travels around the World, leading us to to places remote and off the map. My camera is always attached to my monopod and resting on my shoulder ready for any and every opportunities to capture in a frozen moment the wonders before my eyes.

I don't claim to be the greatest photographer or naturalist but my passion for the subject grows unrestrained. Every hedgerow, tree or building is unconsciously scanned for life. My poor partner Pilar has become accustomed to me driving and scanning the horizon for birds and butterflies (I haven't crashed yet!!)

I'm often asked "what's your favourite animal" my answer is always simple. Whatever I'm paying attention to at any given moment, especially if it's new to my eyes and camera lens, that's my favourite. I do admit though I have a weak spot for birds and butterflies. I still get the same rush of adrenaline pulsing through my veins, quickening my heart that I first experienced as a schoolboy when I heard and saw my first woodpecker.

I feel very fortunate to have this connection with nature hard wired into my genes. My parents always encouraged my sister and I and taught us that all life has value and should be respected and observed. Every life form we known have one thing in common, we all share this fleck of dust, drifting through the cosmos. That makes us all related. As far as we know as of the 2015 we could be the only life there is, although I really don't believe that for a second. I believe science very shortly will peel back the curtains to a cosmological jungle far greater than we ever dared to imagine. I just hope I live long enough to have this realisation confirmed. I keep doing the green smoothies to stack the odd in my favour.

If you'd like to view some of my photos please checkout my photo page by clicking on the link below. This website www.pixelcashing.com is showcasing work from various photographers from around the World, amatuer and proffesional so after you perroused through my collection which I will be adding to on a weekly basis, you might want to look around at the other fantastic work on show. The Natural World Through My Eyes

In the near future through our company www.viddapublishing.com I will be issuing books telling some of our stories and adventures from around the World on a quest to seek out those magic moments in the animal kingdom. We also intend to release some photo journals and books relating to human relationships with animals.

In the next month we have a collection of books being prepared for release called
'DOG TALES' Stories of Loyalty, Heroism & Devotion vol 1-5 which will be a collection of stories from around the world telling accounts of human relationships with man's best friend.

Here are the book covers so please keep your eyes out for them. The stories are accessible for all ages but I warn you to have a box of tissues available for some of the stories. The five books will be available on Amazon Kindle for download or as a digital box set of all 5 volumes in one purchase at a discount. We will also be issuing it through Amazon Createspace for the people who prefer a printed book to read and keep on the shelf. This would make a great Christmas present.


Thanks for reading this post and I wish you all good health and happiness.
John Hodges

We also have a free documentry video page to help you get informed about you and your families health. Obviously it's vitally important to follow a diet rich in the correct nutrients, but equally important is the knowledge of what to avoid. The greatest freedom you can have is control of your own health and what goes into your body. I hope we can help a little in this with the information we are publishing.

In the next week we'll also have a couple of great new titles added to our book shelf. If you're a blogger or a dog lover subscribe and you'll receive updates and release info.
Thanks for your time, John & Pilar